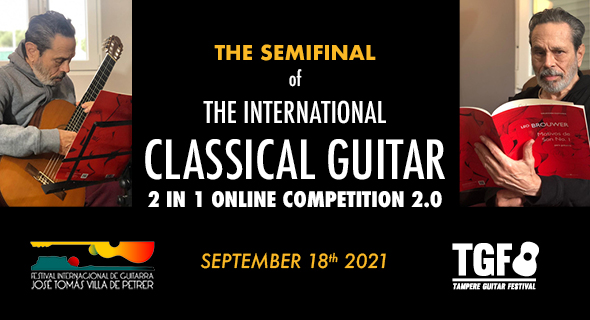 The Semifinal is different from previous rounds. The semifinal videos will be bundled into sets of 5 performances.

For that, the video must be sent this time as a file, not uploaded to YouTube.

Unlike in Round 1, Finland and Spain will have separate Semifinal rounds, from which again 2 independent Juries will select the finalists.

The semifinalists of The International Classical Guitar 2 in 1 Online Competition 2.0 have been selected. From 54 competetitors, the Juries of Finland and Spain have both selected 20 players for their semifinals. 12 of the semifinalists will compete in the semifinals of both competitions, and there are altohether 28 semifinalists from 19 different countries.

The award of The Favourite Video of the audience goes to Accadia, Giovanni (Italy). He got the biggest number of YouTube likes during the Round 1.

The names of Semifinalists in alphabetical order:

Semifinals will be held on September 18th and the Final on October 31st. The winner(s) of the competition will be announced on November 1st 2021.